When I was asked to write this blog about what I’ve done during my four week work placement at Ceredigion Archives I quickly said yes; now I’ve sat down to write it it’s not quite so easy, so here it goes..)

In the past when I have mentioned my work placement, people have often asked “what will you be doing during your time there?”… Well coming to the end now I can say that it has encompassed quite a number of things – I’ve experienced snippets of being a researcher, a genealogist, a detective, a conservator, a cataloguer, and a display maker (if that’s a job) with a little bit of blue-peter style cutting and sticking for making displays.

One of the first things I began doing was re-packaging and cataloguing the Florrie Hamer collection. She accumulated an incredible number of photographs and newspaper cuttings relating to the Aberystwyth area, and put together several scrapbooks which are great to look through (and have very pretty old wrapping paper used for covers). Her grandfather, Dafydd Morgan, was a bailiff at Gogerddan, which obviously gave her a great interest in the estate and the Pryse family. Her passionate interest in local history does not end there; in her collection are histories of Bow Street, Nanteos mansion and Tanybwlch hall, alongside recorded local news events – from a circus with elephants on the seafront in the 1930s to the Prince of Wales attending Aberystwyth University. 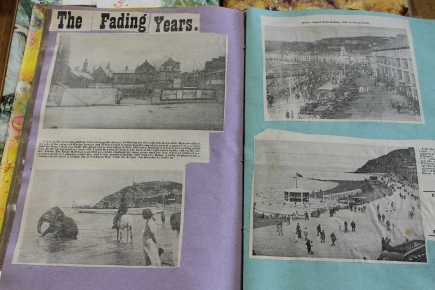 If you come to visit, you will notice the Archives’ World War One centenary display outside.  For every week until mid-November 2018 there will be ‘war news’ of what happened during the week a hundred years ago, and a list of casualties. This week’s display features the sinking of the Amphion, which had actually happened a week before it was first mentioned in The Cardigan and Tivy-side Advertiser. Part of creating this display meant an excuse for volunteers to spend countless afternoons reading through old newspapers. During the not-at-all-very-British-summer weather we had when it was actually hot, we had to have the windows open in the search room – amusingly ensued a game of catch and pin down the photocopied newspaper cuttings before they flew away! (During this time I also learnt that if it got too hot, the strong rooms made great fridges to cool down in!).

As mentioned in the first blog, we also have the very colourful Aberystwyth Pier and Promenade display, which I’m glad to see, has attracted a fair bit of attention. The pictures shown are just a few from the great Glyn (Glynn, or Glynne!?) Pickford collection. It was through helping to sort, re-package and catalogue this that I learnt how to do a bit of detective work! Only a few of the nearly one hundred photographs actually had dates on them. For most it was obvious where they were taken too, but there were a few puzzles. Books on Aberystwyth were the best aid in helping to solve the mysteries, the result of which is that I’m pretty confident in my ability to win in a pub quiz if the subject was the town’s history. 1896, for example, was a busy year: the constructions of the pier pavilion and funicular railway on Constitution Hill, the opening of Alexandra Hall during the visit of Prince Edward and Princess Alexandra of Wales’ – the only time when you would have seen ten warships anchored off Aberystwyth’s castle point. 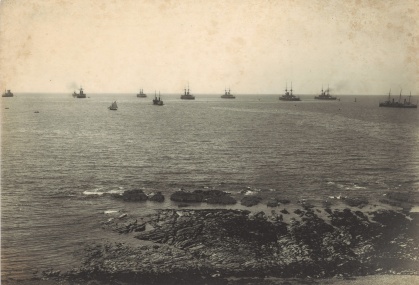 Whilst here I have also: researched family history (which can be much more challenging than I anticipated, but extremely rewarding when you can provide information that someone did not already know about their ancestors); experienced the surprising physicality of records management; uploaded some collections to the online catalogue; generally retrieved and put away some collections; and, finally, written this blog – which I hope has been interesting and encouraged all of you to come have a look at the Archives’ displays and collections.

From a volunteer who has very much enjoyed her time here,

3 Responses to A volunteer blogs!