The arrival of the Belgian refugees in Cardiganshire

The barbarity of the fighting on the frontline in WW1 led to the largest influx of refugees in Britain’s history when over 250,000 Belgians arrived on our shores.  In the early part of the war it gave local people a feeling they were contributing to the war effort. It is in a response to this that Cardiganshire took in a wave of refugees during the early part of the war.

The arrival of a party of 52 Belgian refugees in Aberystwyth on Saturday, 3rd October was announced in the Cambrian News on October 9th 1914.  The paper remarks that they received a rapturous welcome from the locals and were initially accommodated in the Queen’s Hotel.  The paper notes:

It is stated that the adults are distinguished professional teachers, musicians, and painters of a high station in life.

On the Sunday the Rheidol Choir gave a concert at the Queen’s with the singing of the Belgium National Anthem greatly appreciated.

The coming of these distinguished professionals to Wales and Aberystwyth was no coincidence. What the Cambrian News describes as generous benefactors were in fact the sisters, Gwendoline and Margaret Davies, Gregynog Hall who wanted to create a cultural rejuvenation in Wales by bringing established Belgian cultural figures into the area.

It was not only in Aberystwyth that the Belgians took refuge, they were welcomed into communities across the county including Aberaeron, Borth, Cardigan, Lampeter, Llandysul and New Quay while numerous districts established Belgian relief funds for the aid of the refugees.  Amongst our collections is a picture of the Belgian refugees in New Quay with members of the refugee committee at Park Street where two houses were made available for the visitors. 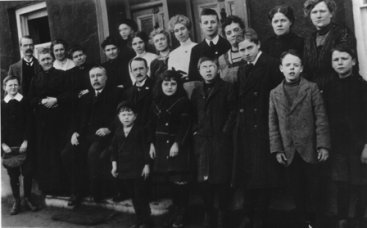 This photograph can be seen in Sue Passmore’s book, One Village’s Wars New Quay in two world wars.

As early as the 16th October 1914 the Belgian contingent were giving recitals with a concert arranged in the Coliseum under the patronage of the University College of Wales Music Club in aid of the Belgian Relief Fund.  Among the distinguished performers was Mm Guillaume, Nicolas Laoureux – a pianist to the Royal Court in Brussels, and Marcel Laoureux – a violinist.  Further accounts of concerts can be seen in the Cambrian News and there is a charming tale of a Belgian concert given on Christmas afternoon in Llangeitho.

Resident in the Aberystwyth area was also a number of artists and sculptors.  Among these was Valerius de Saedeleer, an eminent landscape painter who took up residence in the area with his family and only returned to Belgium in 1920.  More tales of the de Saedeleer family in a later blog!

2 Responses to The arrival of the Belgian refugees in Cardiganshire