As part of Explore Your Archive week we have been given the opportunity to display a copy of a tithe map and extracts of an apportionment schedule from the Cynefin project ‘The Tithe Maps of Wales’. Cynefin is a HLF funded project to digitise over 1200 tithe maps and transcribe over 30,000 apportionment pages.

We have chosen a copy of the Dihewyd tithe map as Ceredigion Archives also holds a copy of the map and apportionment schedule which will be on display in the search room during Explore Your Archive week.

There were three copies of tithe maps produced for each parish: one provided for the Tithe Commissioners (held at The National Archives); a local copy held by the parish (many are now in local archives); and a diocesan copy (the Welsh ones are at the National Library of Wales). Our copy has found its way into the archives from a slightly different path as it was deposited at Ceredigion Archives in 2013, along with its original metal canister and apportionment schedule which had been kept at Nantygelly farm, Dihewyd for well over 160 years.

Tithes were payments made to the Church in England – prior to the 1840s these would have been paid in produce such as wool, crops or stock. However, following the Tithe Commutation Act of 1836 the tithe maps were produced between 1838 and 1850 to ensure that all tithes were paid in money.

The tithe maps and accompanying schedules provide us with a wealth of information on parishes in the 1840s. To tap into this valuable resource and as part of the Cynefin project ‘Ceredigion Local History Forum’ will be using the information contained in the tithe maps to study the history of inns and pubs throughout Ceredigion – The ‘Pubs’ project “A pint of history, Please!”

Clearly marked on the Dihewyd tithe map is the ‘Red Lion’ which is in the centre of the village and the accompanying schedule notes:

The land was owned by William Herbert and occupied by David Evans. The Red Lion field is small – just 2 roods and 14 perches – but David Evans also occupied adjacent Hendy which consisted of a few more fields which probably meant that he was a smallholder as well as a publican, as was not uncommon at the time. 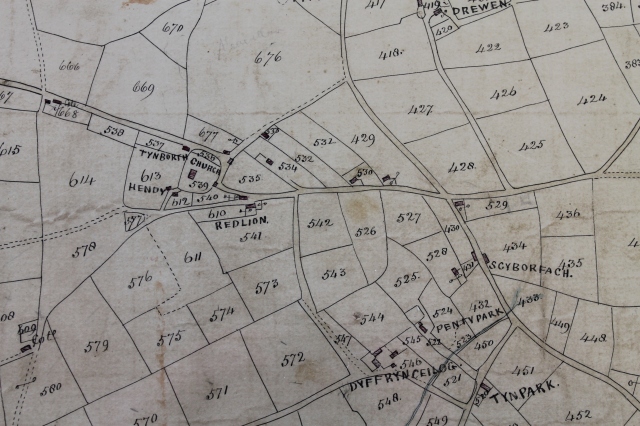 From this initial information, it would be possible to track the history of the pub and its occupant further in documents such as the census, trade directories, parish records, monumental inscriptions, maps and the Return of public houses in each Petty Sessional Division of the county of Cardigan 1905 (Ceredigion Archives – TPS/1/1).

Nearly all parishes in the county would have had a pub – many with interesting stories to be told. Have a look at your local tithe map on the Cynefin tithe map website to see if you can spot any interesting properties, and if you want to find out more then pop into Ceredigion Archives where you can delve into the archives to see what you can find!