‘I do like to stroll along the prom, prom, prom [& to establish a date for the demolition of the 1936 bandstand kiosk], where the brass band plays diddly om pom pom …’

The controversial new bandstand building now nearing completion on Aberystwyth seafront retains a ring of columns from the 1936 bandstand, built to mark the coronation of George VI. The fate of the bandstand’s short-lived central kiosk has long puzzled local historians. These pictures, taken from the collection of William Jones, a lifelong Aberystwyth resident, have at last allowed us to clear up this mystery and to establish a date for the demise of one of the town’s least-known and most mysterious buildings.

These six snapshots illustrate the practice of promenading and seafront photography at Aberystwyth in the 1930s. Four, one of which is dated 8 September 1938 (below, bottom right), show an elderly Samuel Partridge T. Kirk, a retired headmaster from Birmingham. Carrying either an umbrella or a stick, Kirk promenades either by himself or with other pipe-smoking, stick-carrying elderly men. In the background can be seen the 1936 bandstand with its small central building. All were taken within metres of the pier that was presumably the seafront photographer’s base. 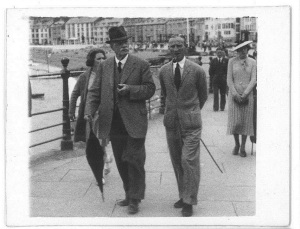 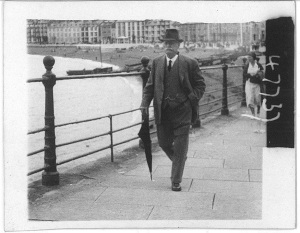 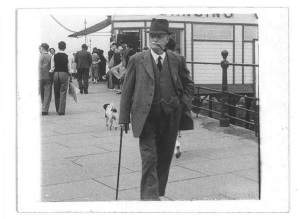 The last two snapshots were taken further along the promenade, between the Victorian shelter and the modern paddling pool. Both show a young woman (identity unknown) wearing the same light-coloured beret and distinctive striped jacket. The 1936 bandstand central kiosk is visible in the background of the first frame, in which she promenades with two older women, but it had been demolished by the time the second was taken, when she walks with an older man. A temporary stage can be seen against the seawall in the second snapshot. No uniforms can be seen and, given the similarity in style of clothing to the Kirk snapshots, it seems likely that these pictures were taken in 1938-9.

[Another guest blog by volunteer John Wiles who is listing this collection (ref. JKM)]