A Strange Case of Arsenic, Expert Evidence and Promiscuity

We present another exclusive guest blog by Richard Ireland.

Richard W. Ireland is a legal historian who taught for many years at Aberystwyth University. He is the author of many articles and his books include ‘A Want of Order and Good Discipline’: Rules and Discretion in the Victorian Prison and ‘Land of White Gloves’?: A History of Crime and Punishment in Wales. He is a founding Committee Member of the Welsh Legal History Society and has made a number of appearances on television and radio.

I love a miscellaneous file. Even though court records contain huge variation in content they are, in layout, often very similar. Variety can be a joy. When the County Archivist drew my attention to RE/PS/5/1, a modest looking grey file, I was intrigued by the contents. There were a number of legal documents, jury lists, receipts, transfers of prisoners etc., but I was particularly drawn to a letter of January 19th 1851 concerning the examination of a teapot and the discovery of traces of arsenic in its spout. The letter concludes “I have therefore no doubt that great care was taken to clean the pot and throw out all the contents and it is only from the ignorance of the person as to the properties of Arsenic that my discovery is owing”. It was signed by William Herapath of Bristol. 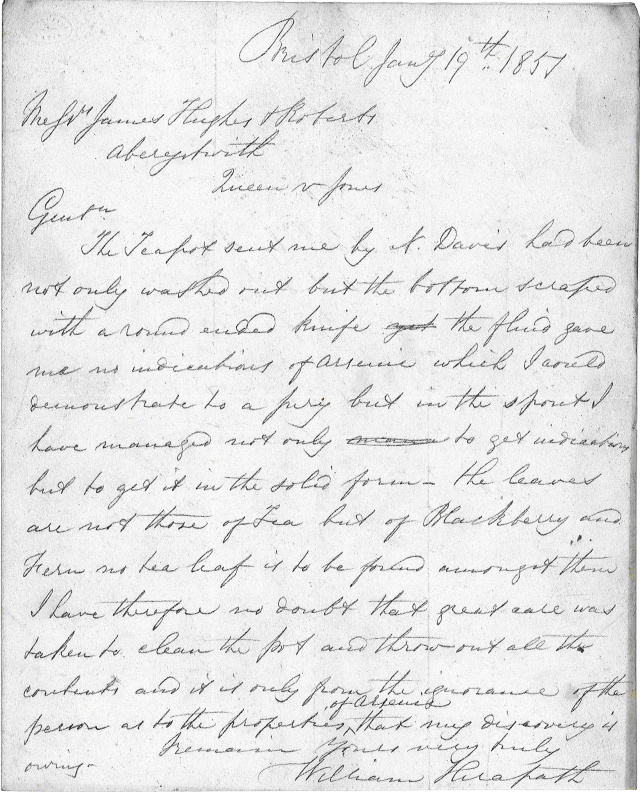 I knew, in a manner of speaking, Herapath (whose name appears incorrectly as “Herepath” in some sources). In my research into the prisoners in Carmarthen gaol I had come across him being consulted in the case of Elizabeth Rees in 1864 for the murder of her child and also in that of the eccentric Ann Matthews, who had stolen letters from the Post Office and was sentenced to transportation in 1849. The former case involved poisoning by phosphorus, and it was as an expert in poisoning that Herapath, in his own description in one case a “philosophical chemist”, made his name. His expertise in this area had led to a seemingly regular transmission of boxes containing excised stomachs and their contents to his Bristol address. He gave evidence at the most famous of all Victorian poisoning cases, that of William Palmer, “The Rugeley Poisoner”, in 1856, but he also proffered opinions on handwriting and strangulation in Welsh cases. Indeed a number of cases from Wales include reference to his investigations, either as a witness in court or by documentary reports. There were, for example, murders in Newport in 1845, Crickhowell in 1849, a second one in Cardiganshire (the case of Jane Davies in 1861), another infanticide in Monmouth in 1855, even a case of potential poisoning of pigs in Bridgend in 1847. Such was his celebrity that when the cause of the recent death of the Tsar was raised at a meeting in Bristol in 1855 to discuss the prosecution of the Crimean War someone from the floor shouted “Send his stomach to Herepath and he will tell you”!

The Agatha Christie qualities of “The Case of the Poisoned Teapot” made me interested in the case itself, so I turned to newspaper records of the trial of Elizabeth Jones, who was accused of the murder by poisoning of her mother-in-law near Pontrhydfendigaid. The case proved to be both unusual and fascinating. The selection of the jury saw many challenges being made, in order that a jury which understood English as well as Welsh could determine the case. This in itself is remarkable admission, for Assize trials were, of course, invariably conducted in English. I have argued elsewhere that the inability of all rural Welsh juries to understand that language was in part responsible for their reputation for delivering verdicts against the evidence. In those cases where the defendant or witnesses spoke only Welsh an interpreter was often employed to assist the court. I have never, however, come across another case where a bilingual jury was ensured and overtly selected at the outset.

The sight that struck the jury, and the packed courtroom (poisoning cases seem generally to have pulled in a large crowd), was also remarkable. The defendant, of “pallid and debilitated appearance”, was allowed to sit in the dock, with her husband standing in front of it and two doctors in close attendance. Her mother-in-law, Anne Jones, had died and signs of poisoning were evident in the body after examination by Herapath. Two crucial witnesses, John Jones and Jane Davies, testified that they had been asked by the defendant to purchase poison and that she had uttered her intention to kill Anne, out of fear that she would sell the farm and render her homeless. The teapot had been retrieved from a hedge by John Jones, but he had mentioned it only, it was claimed, after having been attacked by a group of men. Jane Davies for her part testified that she had had a dream which warned her against going to fetch poison. The case against Elizabeth depended on the credibility of these two witnesses. 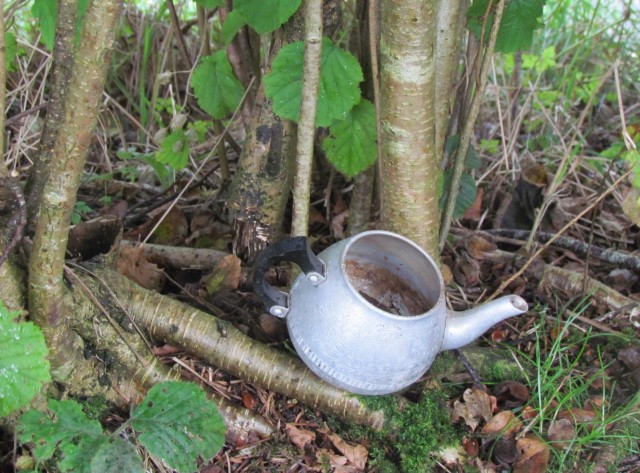 John Jones’s evidence was vulnerable because he had failed to reveal initially matters to which he now testified at trial. Jane Davies’s credibility was challenged along rather different lines. I reproduce the concluding lines of an exchange, as reported by The Welshman newspaper, with John Evans QC, MP, counsel for the defence, which had revealed that the witness had not seen her husband for some time. Perhaps I should point out that the questions eliciting the replies, save for the first, are not given in the newspaper, but may be easily deduced from the answers.

“By Mr Evans: ‘Do you remember going away from him with David Lloyd of Tregaron?’ (Question repeated.) I did go with David Lloyd. I did not go away with an Englishman named Benjamin. I might have gone away with another man. I do not remember his name. I went with a third man, his name was John Kemp. I did not go with another. Kemp was the last I went from home with. Now I am at home I receive visitors if they have messages for me. David Jones, the miner, has been with me many times. I never asked him to sleep with me. I do not remember whether he did or not. I never wrote down those conversations.” [Witness then left the box, exclaiming sotto voce , “I think I have had enough of it.”]”.

What was this all about? Why was the sexual history of a witness in a trial for murder in any way relevant? The answer is that counsel was bringing it up to discredit her reliability in general: morality, it is tacitly assumed, is a seamless web, and a woman who admits to promiscuity, who has lost her “good name”, cannot be trusted in anything. The same tactic was used against Mrs Dyson, principal witness in one of the most famous of all Victorian trials, that of the burglar and murderer Charles Peace in 1879.

After John Jones had given his evidence, inconsistent as it was with earlier statements he had made, counsel for the Crown gave up entirely, saying that “he did not think he should further the ends of justice by carrying this prosecution on any longer”. The judge agreed, as did the jury, who stated that they had “for some time past been of the opinion that the two principal witnesses were not to be relied on”. Elizabeth Jones, who had fainted and vomited during her trial, was acquitted and left the court.

And there it is. Anne Jones was still dead. Her inflamed internal organs still suggested that her death was unnatural.. The teapot with the arsenical spout sat in the courtroom. It had a story to tell, but it was not this story.