My mum was the witness at her friends’ wedding the other week;  she was very impressed by the North Ceredigion Registry Office and the simple but moving ceremony. It reminded me of the weddings we had in Swyddfa’r Sir, the old County Offices, which was the home of Ceredigion Archives and, at the same time, the Registry Office, the Magistrates Court and the Education Department of the local authority. When there was a big wedding in the spacious Cambrian Hall a ripple of excitement would go through the building, and staff would be seen emerging shyly from their offices to catch a glimpse of the wedding party. And what weddings they were! I particularly remember one where the groom arrived in a Friesian cow outfit. And over the years there were so many beautiful dresses, proud maternal tears, and excited small bridesmaids rushing about in an ecstasy of satin and tulle. We have plenty of records in the Archives about the Queen’s Hotel, and the County Offices, but nothing to commemorate these particular moments but our memories.

I remember too many new parents whose tiny babies had their first brush with the bureaucratic world, as they visited the Registrar to get the birth certificate, thus beginning a whole lifetime of filling in forms. The Archives team would always offer congratulations as we pointed them to the Registrar’s front door.

The story of the splendid sea-front building starts with the Queen’s Hotel and currently ends with the detective series  ‘Y Gwyll /Hinterland’  where it featured as the Cambria Police Station.  It opened in 1866 to provide first class accommodation for tourists arriving by rail. We have a poster (c.1870) reminding the public that the Hotel is ‘replete with every modern appliance, contains COFFEE, DINING and COMMERCIAL ROOMS, LADIES DRAWING ROOM, LIBRARY, BILLIARD, SMOKING ROOMS &c.’ and ‘for the accommodation of Invalids a suite of Bedrooms is provided on the ground floor’.  The building’s lift was not installed until 1926. There were some luxurious touches which survive today – the stained glass above the staircase (could it be by Burne Jones? I always hoped so), the QH’s in curly ironwork in the great Cambrian Hall, the vast mirrors making the place seem even larger.

We have a brochure with photographs which show the Cambrian Hall as ‘the tastefully decorated Dining Room with a seating capacity for 180 guests’ also ‘equipped with a Dancing Floor and … used for Dinner Dances during the Winter Months’.  Oh for a time-machine just to visit that place once! We had a link with the past in the person of Mr. Morgan who used to visit occasionally and once brought us a photograph of himself as a young man working at the Hotel in the late 1930s, smartly attired in his uniform and standing in that tasteful dining room.

The Queen’s was used by the R.A.F in the Second World War, and we have recently been given a copy of a photograph of the young men and women who comprised No1 Squadron No. 6 ITW ( Initial Training Wing) in March 1942, posing outside the building. In the 1990s a visitor to the archives recalled guarding the front steps with an unloaded rifle during those war years. He observed ‘if there was any trouble we couldn’t shoot anyone, just bash ‘em with the gun’.  Happily, he did not recall any trouble.

Towards the end of the Second World War an Emergency Maternity Hospital for London mothers was set up within the building. We have records ( not yet open to the public, but we’re keeping them safe!) which show that pregnant women, mostly from the East End of London,  were conveyed by train to the safety of Aberystwyth within weeks – or even days – of their expected confinement. Then, within a few weeks London was declared safe and the mothers and their babies went home.  On several occasions over the years the Archives had visits from bemused Londoners who had looked at their birth certificates & discovered that they had been born in ‘The Queen’s Hotel, Aberystwyth’. It was always a pleasure and a privilege to show them around the building. 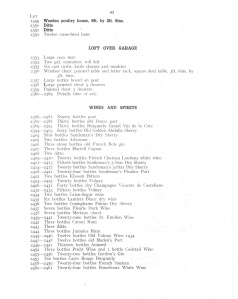 In 1950 the building was sold to the County Council. The sale took five days and the catalogue survives in the Archives. It reveals the contents of the building room by room from the wine cellar ( there were 40 bottles of dry Champagne Vicomte de Castellane – mmm ! ) to the greenhouses  full of hydrangeas and geraniums, and the three wooden poultry houses with twelve cross-bred hens.

For the next sixty years the Queen’s Hotel was ‘Swyddfa’r Sir – The County Offices’ and in its little rooms many of the local authority documents in our collections were created. The District Nurses used the building as their base, the Police Station was situated there, and the Magistrates Court too. So was the School Dentist, and somehow the back staircase retains a faintly antiseptic smell after all these years.

And then the County Council moved on, and the building was empty apart from the Archives, whilst we waited until our new premises were built. There was silence where there had been so much sound over the years. I remember looking out from a tiny window on the third floor and finding myself nose to beak with a seagull on her nest.  Then the film crew came – just as we were moving out – and all the fascinating smoke-and-mirrors stuff of television, as many different parts of the building were used as sets; at one point there was even a cottage in the middle of the Cambrian Hall.

For the people who worked in the building over the years there are many personal memories  – of friends long gone, of the endlessly changing views of the sea, of the swish of the old filing cabinet drawers, and the weighty clunk of the lift door. Yes, we have lots of official documents to record those times, but do the records reflect the experience? It makes one realise the gap between archives and memory, between the written word and the moment passed. We’d really welcome some recollections .

I won’t be writing any more blog for a bit. My colleagues tell me I go on too much. I’m sorry to say they’re right. So now it’s their turn…